The French trip got of to an early start, leaving school before 6am this morning. After encountering a few traffic delays, we arrived at the Le Shuttle terminal in Folkestone and once on the train it was only 35 minutes before we were in France.

Nausicaa, the biggest sealife centre in Europe, was our first port of call and we were excited to see the sharks, sea lions, penguins and stroke the sting rays.

We then arrived at the hotel where we have all enjoyed a lovely evening meal and an evening of games in the garden. 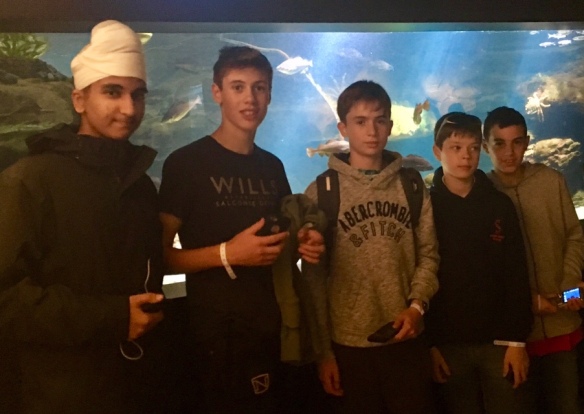 Soon to say ‘au revoir’ to Stoneygate, the Year 8s recently enjoyed a post Common Entrance, celebratory ‘petit déjeuner français’, complete with croissants, pains au chocolat, jus d’orange and chocolat chaud.  For those with bigger appetites (and that was just about everyone!) there was also baguette with confiture à la fraise, confiture aux abricots and nutella.  A veritable feast française!

Madame Palfreyman and Madame Hosie found some French songs on You Tube, but Johnny Hallyday and Françoise Hardy were deemed too ‘last century’ , and Artus, Sam A’s French penfriend who was also there, soon found some French rap artists, which, it has to be said, went down rather better with our teenage breakfast- eaters!

Madame Palfreyman and Madame Hosie wish ‘bonne chance’ to all the Year 8s as they leave Stoneygate and start at their new schools.  We hope they will continue to learn and enjoy le français!  A bientôt!

Le Jour de l’Épiphanie, les Français tirent les Rois avec une galette des Rois. This old French tradition is held on the 6th of January and celebrates the three Kings giving their gifts to the baby Jesus. The family buys a galette from the boulangerie, with a fève (traditionally a bean, or a small figure of a person) hidden inside it. The cake is placed on a table and the youngest member of the family sits under the table while the cake is cut. Once it is cut, the youngest person designates a slice of cake to each member of the family: this is called “tirer les Rois”, which means ‘to pull (or discover) the king’. The person whose slice contains the fève is crowned le Roi and gets to choose a king or queen to rule with them for the day!

…While Marcus went under the table!

Croissants, pains au chocolat, baguette, Nutella, strawberry jam and chocolat chaud were all on the menu this morning for 8DP’s post-exams French breakfast!  Instead of the more usual diet of vocabulary and grammar exercises, in today’s French lesson, 8DP were chatting – in French, of course! – about their favourite breakfast foods and their plans for the weekend.

Matthew, William, Kipp, Ben, Chloe, Louise and Emma tucked into their feast, whilst listening to a live French radio programme! The French goodies disappeared in no time, with the pains au chocolat arguably the most popular item on the menu – further enhanced by the addition of Nutella in some cases!  Delicieux!  Bon weekend à tous!